Self-taught composer, Aimé Dontigny is one of the founding members of the ‘free noise’ collective Napalm Jazz (Free transgénique, 1998), and of the duet morceaux_de_machines (liberum arbitrium, 2002; Estrapade, 2004).

He devotes himself eagerly to the numerous challenges offered bu the new forms of modern and contemporary improvised musics, and is particularly interested in the development and recognition of those expressive artforms. Since 2003, he has been actively involved in the creation of the Canadian New Music Network, a national, bilingual organization aiming at promoting and widening the horizons to ‘new music’ (in its broader definition).

His works comprise multiple subltes quotes and references, and his acoustic palette adapts to many different aesthetics, as demonstrate his projects with Diane Labrosse (Télépathie, 2002), Chantal Dumas (Duophone, 2003) and his ongoing yet unreleased collaboration with composer Paul Dolden.

As did numerous western composers of all times, Dontigny frequently finds his inspiration in literature. One of his projects, titled Sine Fiction, has for a daring premice the creation of ‘original soundtracks’, not for films but for books; in that very case, science fictions novels among the most groundbreaking and popular of the genre. One can also perceive in many of his works the direct influence of writers as diverse as William S Burroughs, Anthony Burgess, Guy Debord and Denis Vanier.

Another characteristics of Dontigny’s compositions is the prevailance that is therein granted to a meditation on the history of music, literally: in that sense, his work is really one of ‘reflexive’ purpose, as through it the musician questions his own role as an artist, the conditions of possibility of an understanding of music and of the limits of its experience, inviting the listener to ‘think’ as well. Dontigny reflects both on practice and on musical theory; in that perspective, the quotes in his pieces are not accidental. Dontigny directs his research towards a rooting of art in history: can we deny for much longer that music, while so profoundly linked to technological advances and innovations, and embedded in telecommunication industries themselves subordinated to certain economic factors, that music is a direct product of its community? Can an artist claim heteronomy, or does he have to endorse political responsabilities? Aimé Dontigny makes the choice of commitment; his works provoque debate and exchange of ideas, yet they put the sensible experience first. Dontigny speaks as a musician and as a modern and post-modern music historian. 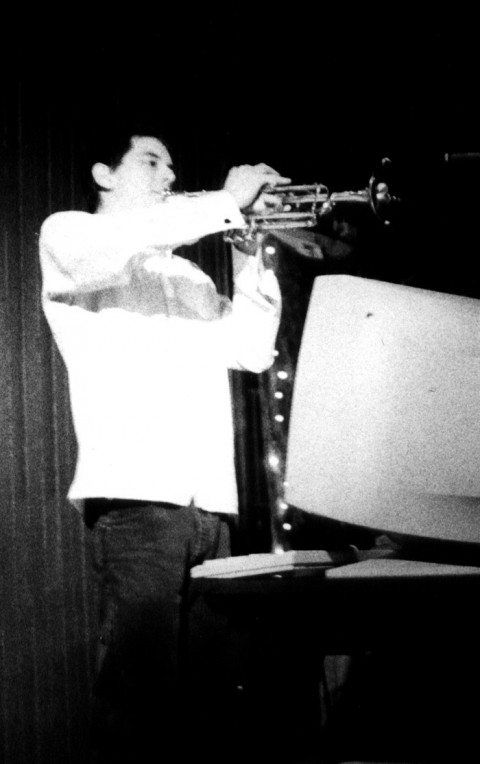