Paul Dolden begins his career at age 16 as a professional electric guitarist, violinist and cellist. Excited by the possibilities offered by recording technologies, Paul Dolden turns to contemporary modes of production and dissemination in the creation of his music. At age 29, he wins the first of a string of European awards that establish him as a composer. Now the winner of over twenty international awards, Paul Dolden’s music is performed in Europe and North America to wildly enthusiastic audiences.

In a career spanning over thirty years, Paul Dolden has perfected his unique approach to audio technology, using it as a platform from which to launch or capture otherwise impossible musical performances. In this way, he makes his computer behave like a new, virtual orchestra and manipulates it with as much sensitivity as he would a traditional one. His compositions are characterised by a maximalist aesthetic in which hundreds of digitally recorded instrumental and vocal performances are combined in multiple layers.

Paul Dolden’s music has been described as the “missing link” between jazz and rock and the high-brow concert tradition. Critics have called it “music for the information age, enlisting noise, complexity and beauty in its quest for excess,” and characterised it as “apocalyptic hyper-modernism.”

The early works employ a unified approach to timbral and harmonic variation. Under the influence of post-modernism, Paul Dolden’s concerns have shifted to include the juxtaposition and superimposition of disparate musical styles evident throughout the Resonance Cycle of works (1992-96). Always working to surpass himself, with the Twilight Cycle of recent years Paul Dolden boldly investigates the forbidden fruit of contemporary new music: melody and dance rhythms.

Since 2003 Dolden’s compositional approach has included detailed study of different musical styles and nature sounds to uncover their relationships. Dolden then recombines their unique properties to create an auditory bacchanal of otherworldly textures, polyrhythms and microtonal melodies. For example in the Who Has… Cycle of works (2005-09), nature’s handiwork is everywhere, from the massive swarms of insects to the busy sections of brass and winds which model the same intense microtonal and polyrhythmic patterns.

Dolden considers the relation between culture and geography and takes it to its logical extreme. He first recognizes it is no coincidence that country music sprang to life alongside the howling hounds of the open plains, and that Spain begat Flamenco alongside crickets that chirp in 6/8, and then complements these naturalistic sounds with live performers who accompany and comment on the musical circus. Throughout this cycle unity is maintained by recurring melodic themes, presented by a choir, shredded on guitar, barked by dogs and generally embedded and transformed throughout.

While listeners have always concluded that Dolden “has the biggest sound,” he instead suggests that it is nature itself. Scratching the surface behind the tropes and humor within the Who Has… Cycle reveals a desperate cry for both musical and environmental relief. If nature has the biggest sound, nicest melodies, and biggest noise, then it must be respected and protected.

Since 2010, in a series of works for soloist and tape, and in Music of Another Present Era (2013-16), Dolden is inspired by mythologies. Myths are featured in every culture and continue today in urban legends and in the expansive fictional mythoi created by movies and popular music. The works of this period play freely with our historical imagination, specifically, our ability to imagine another time and culture through its mythological stories. At the same time this imagining is always conditioned by our time and the current state of our own music. For example, Dolden imagines that the myth of Marsyas was like our Battle of the Bands, that Shango, the African God of Storms, had a laid back funky groove, that the original Moon festivals had Girly Songs, that the original Cosmic Circle Dance was like a big band swinging in 5/4, and that the Samaritans in the West Bank during Babylonian times performed Show Tunes.

In short, in Dolden’s most recent music, myths from the past collide with present musical styles in a quest for pure musical beauty. 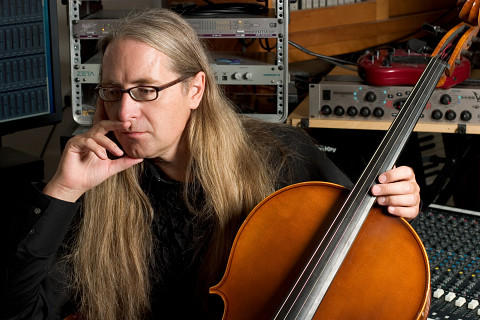