Ranked among the world’s leading exponents of vocal sound art, soundsinger Paul Dutton has been working with the extensions of human utterance for over thirty years, in ensemble and solo contexts, in concert and on recordings. He has appeared in music and voice festivals, in clubs and concert-halls, across Canada, Europe, and the United States of America. His principal collaborators are pianist Michael Snow and saxophonist John Oswald in the free-improv trio CCMC; and fellow vocal sound artists Jaap Blonk, Koichi Makigami, Phil Minton, and David Moss in the group Five Men Singing. His more occasional collaborators have included such musicians as John Butcher, Bob Ostertag, Dominic Duval, Phil Durrant, John Russell, Lee Ranaldo, Christian Marclay. Günter Christmann, and Alexander Frangenheim.

With an early background in choral singing, traditional British folk music, blues, and creative writing, Dutton first began exploring oral sound art as one of The Four Horsemen, a group that worked with self-generated textual material and improvisational vocal sound. The group achieved legendary status in the ’70s and ’80s among literary, music, and theatre audiences in Canada, Europe, and the USA, through extensive touring and releases of two LPs, a cassette, and a book of performance scores.

Throughout The Four Horsemen’s eighteen years of activity, Dutton continued his solo career as a writer and vocal virtuoso. His first solo sound recording was released in 1979, and since then he has issued two audiocassettes and a CD, and has been included on numerous CD compilations. In 1989, Dutton joined the Toronto free-improvising band CCMC, with whom he has issued four recordings-an audiocassette and three CDs. The band has been a trio (Dutton, Snow, and Oswald) since 1994. In 2003 Dutton formed the voice quintet Five Men Singing, with Jaap Blonk, Koichi Makigami, Phil Minton, and David Moss.

In addition to his musical activities, Paul Dutton is the author of six books of poetry and fiction, and of numerous essays on music and musicians. 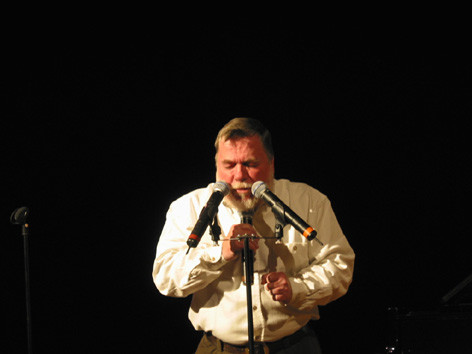