Following her classical studies at the Royal Conservatories of Mons and of Brussels, and her studies with Jean Absil, Annette Vande Gorne chanced upon acousmatics when on a training position in France. Instantly convinced, by the works of François Bayle and Pierre Henry, of the revolutionary nature of this art form (disruption of perception, renewal of composition through spectromorphological writing and listening conduction, historical importance of the movement), she took a few training positions to grab its basics, then studied musicology (ULB, Brussels) and electroacoustic composition with Guy Reibel and Pierre Schaeffer at the Conservatoire national supérieur in Paris.

She founded and manages Musiques & Recherches and the Métamorphoses d’Orphée studio (Ohain, 1982). She also launched a series of concerts and an acousmatics festival called L’Espace du son (Brussels, 1984; annual since 1994), after assembling a 60-loudspeaker system, an acousmonium, derived from the sound projection system designed by François Bayle. She is the editor of the musical aesthetics review Lien and Répertoire ÉlectrO-CD (1993, ’97, ’98), a directory of electroacoustic works. She also founded the composition competition Métamorphoses and the spatialized performance competition Espace du son. She gradually put together Belgium’s only documentation centre on that art form, available online at electrodoc.musiques-recherches.be

She gives numerous spatialized acousmatic music performances, both of her own works and the works of international composers.

Professor of acousmatic composition at the Royal Conservatory of Liège (1986), then Brussels (’87), and Mons (’93), she founded an autonomous Electroacoustic Music section at the latter, later (2002) integrated to the European graduate studies framework. Since 1999, she has been managing an international summer training session on spatialization and — since 1987 — on electroacoustic composition.

Her works can be heard in every festival and on every radio program presenting fixed media-based (previously ‘tape’) music.

In 1995 she was awarded the Prix SABAM Nouvelles formes d’expression musicale [SABAM Prize for New Forms of Musical Expression].

Her current work focuses on various energetic and kinesthetic archetypes. Nature and the physical world are models for an abstract and expressive musical language. She is passionate about two other fields of research: the various relationships to word, sound, and meaning provided by electroacoustic technology, and the composition of space seen as the fifth musical parameter and its relationship to the other four parameters and the archetypes being used. Her work falls essentially in the acousmatic category, including the Tao cycle and Ce qu’a vu le vent d’Est, which renews electroacoustic music’s ties with the past, with a few incursions in other art forms, including theatre, dance, sculpture, etc. 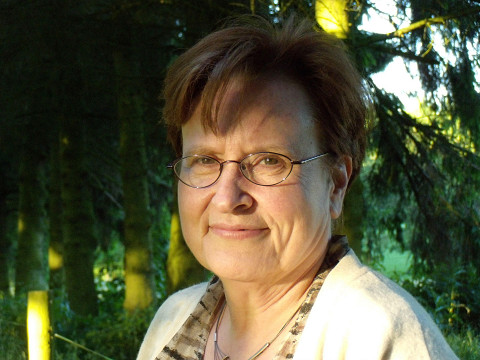