Cinema foley artist Marie-Jeanne Wyckmans’s passion for sound and listening pushed her to discover acousmatic music in 1984, at the 1st edition of the Festival acousmatique international L’Espace du son in Brussels (Belgium).

She had been drawn by the title of the event, and there she was thrilled to hear all the possibilities offered by acousmatics: the figurative meaning of space found in stereo works and the spatialized performance of acousmatic works in live settings, which she has been practising regularly since 1988.

While working her trade in the film world, Wyckmans applied sound creation to cinema, dance, television, video, and the theatre.

However, her main focus remains on electroacoustic and acousmatic composition, which she has taught in various Belgian arts colleges, including the Conservatoire royal de Mons / Arts2 — École supérieure des arts, the Institut des arts de diffusion (IAD), the Institut supérieur des arts (INSAS) and the Royal Institute of Theatre, Cinema and Sound (RITCS).

Her works are a reflection of her interest in imaginary worlds, like the worlds transmitted by the radio, which she listens to daily, and she relays those worlds as imagined landscapes where iconic and transformed sounds act as land features orienting listeners’ mental representations. They also convey her ability — honed in her career as a foley artist — to make non-instrumental sounds speak, to make them expressive, to manipulate sound bodies with precision and a keen attention to the tiniest eloquent variations they can offer. Landscape recordings and play-sequences have become the cornerstones of her works. 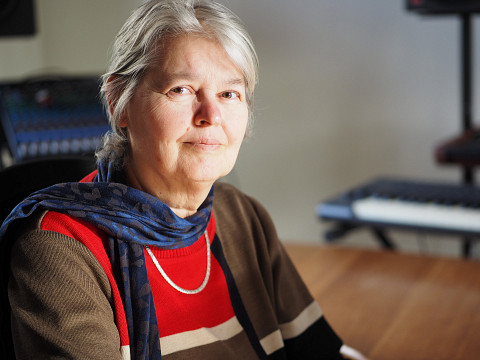